Many of us love writing because it is intangible.

It is it’s intangibility that makes authorship such an efficient way to dream, for example!

The Intangible As Another Way

In college, I had a business idea that I am still pretty keen on. But the more I looked into what would go into creating it, the more I realized actually building a business like that was pretty cost prohibitive.

Reality can be a pretty inefficient way to bring about that idea! One day, it occurred to me: I could actually claim the fun of exploring this idea by writing a story about it instead, with no overhead whatsoever, at least compared to actually creating that business!

And I never really looked back or wanted to start any kind of bricks-and-mortar endeavor, at least not for a while.

Dressing Into the Tangible

On one hand, writing can be a preferred form for exploring ideas because it is so accessible.

But last week, I explored the reverse: what more can I do to make the fictional Regency-era steampunk world I’m writing about more tangible? What lessons am I missing out on by creating this story in an intangible way? How might re-introducing the tangible inform my little intangible universe?

In January 2018, I had the opportunity to interview Jeff Mack, who runs a number of large festivals. Unforunately, I’ve since decided to not post my interview with Mr. Mach for reasons you can read here. At any rate, when Jeff suggested we dress up in steampunk, I decided it was time to try to dress like the protagonist in my upcoming series Peacock Lavine and the Aetherian Fates of Nott. 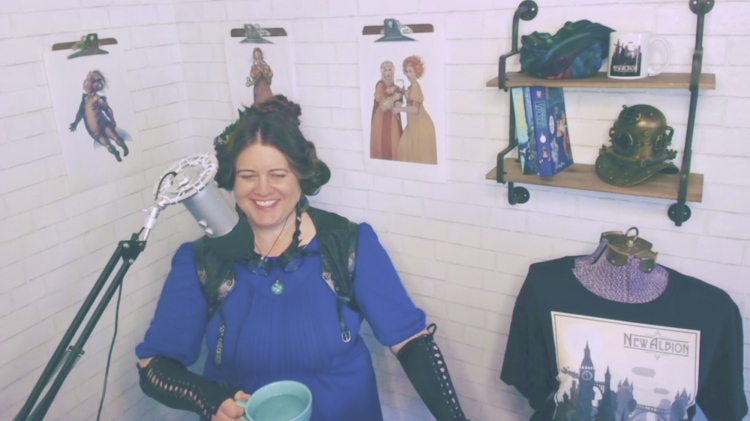 Now, dressing up like Peacock Lavine means finding a Regency-era dress and steampunking it, since my novel begins in 1812. Since most steampunk takes place in the mid to late 1800s, this means branching out into unknown territory on some level. Also, my series involves urban fantasy in the form of Norse mythology, and primarily the lesser known figures from that mythology (ahem, namely the women!).

So, no matter how you slice it, this presented a costuming challenge, but I gave it my best shot.

The dress alone was simply not something I know how to sew or construct, and I didn’t have time to order one (or the budget, which is completely justified for these historical costume pieces, I have mad respect for people who put them together!). So, as I explained in that episode, I did the best I could with a 70s dress procured from the thrift store and a few tips and bops from stuff I could find on Amazon.

The result was something kind of Regency, kind of steampunky, and not very Norse!

To be fair, I did order some fur-lined accoutrements as well as a fantastic oversized bird skull mask, which did not arrive. Another reason to start costuming early, as in, before you even have the thought that you might possibly need a costume! 😉

Each costume consideration became evidence to me that putting together something tangible requires a lot of thought . . . even after one does the work of creating or developing the intangible thought!

Making something the way so many makers do in the steampunk space, for example, involves choice after choice about how to do the idea justice with tangible materials.

I found myself wondering things like: What materials will wear well throughout a long day? What are the temperature considerations? How does someone run away from a cat-like revenant in this? (See: Draugr!) What can I do to make this look otherworldly, even though I’m using materials of this world? And what is it like to try to do one’s hair like the Bennett girls without electrical curling tools?!

So, one lesson was that when we make things tangible, we grapple with details. It’s something I’ve known before, but I realized it all over again through this little experience.

It’s something the world’s travel-loving authors know: that being onsite to study an area, event, re-enactment, or culture is not just an excuse to travel (although, so what if it is?!). Immersing oneself with tangible surroundings of the story when it is possible is another way to discover detail.

But it surprised me that, also, getting all tangible can be a way to discover big-picture considerations. For example: Maybe the glowing eyes is more a thing in this world than I’d thought, etc.

Tangibility also comes in many forms and gradations, of course.

When I began working with my cover artist, that represented one level of trying to make the intangible visual. While I attribute the awesomeness of these covers to my very talented artist, I spent significant time putting together the reference sheets and ideas. With each one, this process led me to discover something I wanted to include, omit, or otherwise inform how I would edit that particular book. 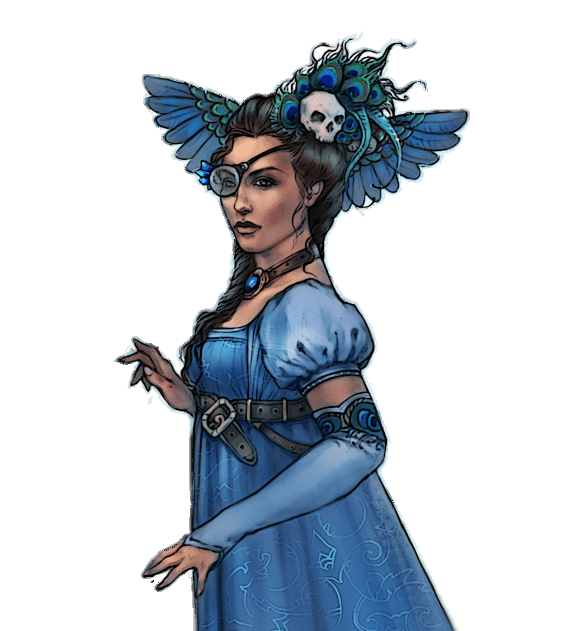 And yet, going a step further toward intangibility meant discovering additional ideas about the character.

When I put together this costume, it created a synthesis of elements that will that revealed what was missing. Essentially, when I stand there costumed as Peacock Lavine without a book title over her head or a relevant background, does the message come through?

You Can Lose Your Way

As with all topics productivity, it’s absolutely possible (and for some people, the tendency!) to take things too far.

So, that’s my adventure playing dress up! I hope it offered you ideas for how you can make the intangible more tangible, whether that means costuming, traveling somewhere, making some artifact, living like your character for a day, etc.!

I’d love to see pictures or hear about what you’re doing, so feel free to reach out on social media, and have a wonderful week!