NaNoWriMo has come and gone, leaving victors and casualties in its wake.

Even though I finished my NaNoWriMo this year and in fact produce enough fiction word count to call every month a WriMo, I identify more with the dropouts because I tried to do National Novel Writing Month several times before this year–all ‘fails’!

What was different this year?

1. I Reinterpreted the Finish Line

There’s something about staggering across the finish line even if the crowd has left and gone home. So earlier this year I did something I’d never done the previous years–I finished my NaNoWriMo ‘fail’ anyway.  I defined a new finish line!

Finishing an entire novel draft is a huge hurdle and one that helps you write the next one more expeditiously.

That one took me two months to finish (well, three counting the previous November). But most months thereafter I started new drafts until I could finish writing one in a month.

2. I Got A Bit More Jillian Michaels About My Writing Practice

I’ve been dreamy and whimsical about creative writing, but I’ve never brought a boot camp approach to my manuscripts…until this year!

“Unless you puke, faint, or die, keep going…”

Specifically, earlier this year, I described how I changed my whole mindset to one of sacrifice: But Have You Been Willing to Get Crazy? 20 Ways to Sacrifice More to Be a Writer.

While my priorities like family are non-negotiable, I found I had oodles I could do without in the name of following my dreams. Is it painful? Um, yes. But I’m finally getting somewhere on my fiction projects because of it!

3. I Opted for Better Mistakes

I stopped giving myself outs in the name of finding the perfect way to do things before acting. Instead, now I mentally give myself more leeway to make mistakes in the name of just moving ahead with projects. I swapped the failure to act for the failures that teach me what to do better next time!

“It’s not about perfect. It’s about effort. And when you bring that effort every single day, that’s where transformation happens. That’s how change occurs.”

One of my favorite authors also inspired me on this point:

“If we listened to our intellect, we’d never have a love affair. We’d never have a friendship. We’d never go into business, because we’d be cynical…Well, that’s nonsense. You’ve got to jump off cliffs all the time and build your wings on the way down.”

By the way, check out this awesome illustration of Bradbury’s sentiments on the site Zen Pencils. 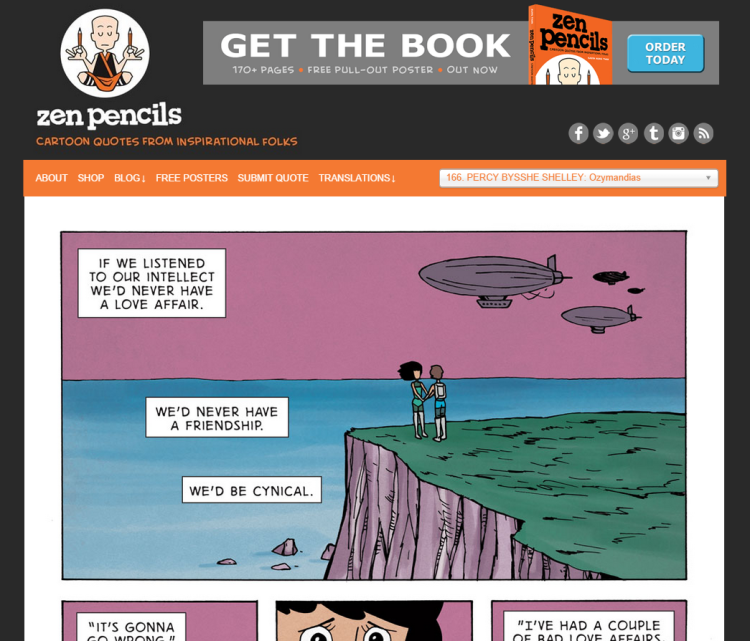 I was tired of not making progress on my fiction projects! I made a list of 23 Productivity Tips for Writers, because sometimes it’s a matter of refining a whole bunch of little things to effect a larger change. My list represents ways I stopped playing around with my creative writing and started committing to the work, the way I do with my non-fiction writing for About.com and other projects.

5. …But It Also Helps That I Discovered a Secret Weapon!

Humans innovate. That’s what we do. But when it came to creative writing, I was technologically-stagnant for quite a while. So this year I sought out new ways of doing things.

Specifically, I learned to dictate! As in, speaking my creative writing rather than typing it.

Dictation allows me to draft significantly faster while going on writing walkabouts, thus getting my exercise while writing and reducing the repetitive motion stress of typing. It also helps me focus–fewer distractions! While I’m still relatively new at it, I have been blown away by how dictation has changed my life as a writer.

Yes, changing how my mind creates was pretty daunting! I mean, I even like typing–it makes me feel all writerly. But now roaming the hills like Thoreau (yes, I spelled this Thorough earlier today–uh, not quite right!) or other literary amblers makes me feel that way, too, while affording me tons of other benefits.

13 Advantages to Dictating Your Writing

So, If NaNoWriMo was less the empowering kick in the pants for you that it was for me this year (as I expressed in my post 5 Words I Made Up to Describe NaNoWriMo) and more of an unreachable summit mocking you and causing you full-blown angst–

Restrategize. Reapproach. This is nothing new, but I feel like I always need reminding of it: The only real failure is failing to keep trying or failing in the same way without innovating.

Do not give up!